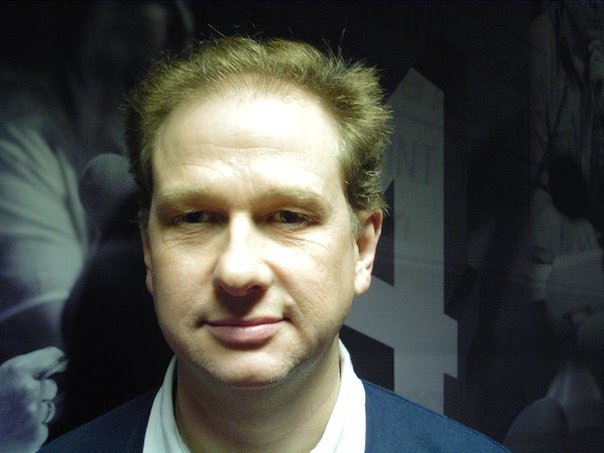 Hong Kong flicks have been enjoyed by Western audiences for several decades, thanks in large part to the English-language dubbing these films received in their native country. While HK dubbing has been the subject of countless magazine and Internet articles over the years, very little information has come out from the principals directly involved. For the first time ever, Vaughan Savidge answers questions about his HK dubbing career, in an interview conducted by Oriental Cinema‘s Damon Foster and Brett Homenick.

Q: What was your background before you came to Hong Kong?

A: I arrived in HK at the age of 16. I went to school there for one day, but felt that learning pottery, French, and playing the double bass weren’t really going to get me anywhere. Actually, the French would have been useful, as these days I have a place in France that I go to every month.

Q: How did you end up in Hong Kong?

A: My parents were divorced, and it was one of the few places my mother could still get her alimony! It was either HK or South Africa, and in those days South Africa was still a racist country, so best avoided.

Q: What are the circumstances that led you to being involved in the HK movie-releasing business?

A: It was through friends, who gave me a chance. I’d been working in radio at Radio Television Hong Kong and Commercial Radio. And I’d done a little bit of dubbing for other groups. Some friends and I felt it was a bit of a closed shop, so I asked someone I knew whose father owned First Films if we could do some dubbing for them. They agreed, and we became good friends.

Q: What were your various assignments (translating? dubbing? scripting?) in the HK movie-releasing business?
A: Mostly, you would receive a Chinese script with English subtitle translation. I would then either listen to an audio cassette tape of the film and attempt to write the English dubbing script from that – or do it from a videotape – and sometimes a dubbing 35mm print. I had an old Moviola, but it was rather temperamental and would sometimes tear great chunks out of the print, usually in the middle of the night when the script had to be ready in the morning. It could be fairly stressful. One week I slept for only about 10 hours because we were writing and then dubbing 5 films. My wife used to help me a lot with the translations, as she spoke Cantonese and Mandarin. The dubbing was with a small coterie of regulars. We all accepted that there was only so much you could do because of the process. The film was cut into 45 second loops – and we would sit around a microphone doing the best lip sync we could. But the finished product was pretty rough by American dubbing standards.

Q: When you wrote dubbing scripts, what was the process like? What effort was made to match the lip movements with the dialogue?

Q: We’ve heard rumors that English dubbing industries didn’t pay well, and that makeshift studios were hastily thrown together in cheaply rented rooms. What were conditions like, in the audio-dubbing studio?

A: As mentioned above, the looping system was pretty basic, and so were some of the studios. There was one directly under the flight path of planes landing at Kai Tak that had egg boxes for sound proofing. At another, I once saw a large rat nosing around the flip-flopped feet of one of the dubbers while he was doing a loop. The technicians were often elderly and had been doing this for years – mainly in Mandarin, and sometimes Cantonese. They were very professional, but the system/process was not the same as rock and roll, which eventually came to HK through Video Films. We worked for them a fair bit, and their facilities were a huge improvement on some of the other studios.

Q: What was the first movie you worked on?

A: It belonged to First Films. I can’t remember the title.

Q: What was the last movie you worked on?

A: Not sure. We must have done somewhere between 150 and 200 of them – everything from kung fu to war films and two or three soft p*rn films. They came from all over Asia – HK, Taiwan, Thailand, Korea, and the Philippines.

Q: Did you ever appear on screen, as an actor?

A: I can’t honestly remember, but I think not.

Q: What was it like working with Ted Thomas?

A: I only worked with Ted a couple of times. He was always charming and amusing. He ran a different group, and we were in sot of competition, although he had Shaw Brothers sewn up as his client, and perhaps also Golden Harvest, as well. I worked mainly for independents.

Q: Who are some of the names of the other audio-dubbers [you worked with], and can you remember any specific roles/films they’re in?

A: Warwick Evans, Barry Bakker, John Culkin, Suzanne Vale, Martin Evan-Jones, Rick Thomas. There were a lot of dubbers, but I’m afraid my memory fails me as it’s around 27 years ago that I stopped!

Q: Can you remember any specific roles/films that you yourself dubbed, where fans might be able to recognize your voice?

Q: Did the dubbing business improve as HK movies gained international popularity in the 1970s?

A: There were more movies, yes, and our business improved as a result.

Q: Did the dubbing business decline in the 1980s and 1990s, as subtitled prints started gaining popularity?

A: Not sure as I finished in 1983, I think, and it was certainly pretty full on until then.

Q: Did you work with, or get to know, any of the HK kung fu actors themselves?

A: No. I interviewed some when I worked for one of the newspapers. I remember Alexander Fu Shing was a nice man. He was one of Shaw’s better stars, but sadly died in a car crash.

Q: It’s been said that the Shaw Brothers wanted to release their movies in English as far back as the 1950s (when many of HK’s movies were just musicals). Is this true? Was there ever a plan to dub Kwan Tak Hing’s old “Wong Gei Hung” movies (of the 1940s and 1950s?)?

Q: For decades, it was believed that Five Fingers of Death was the first time Westerners saw a Chinese martial arts movie. But an English movie poster of The One-Armed Swordsman recently surfaced. It not only says, “Metro Goldwyn Mayer Presents,” but states, “Starring: Wang Yu.” It doesn’t say “Starring JIMMY Wang Yu,” a name that was coined in the 1970s (when many Chinese actors were given English names). So is it possible that The One-Armed Swordsman might have gotten a U.S. release before the kung fu boom?

A: Not sure. You could ask my friend Hoi Wong at First Films, as I think it was one of his. We dubbed a version of it, and I included the immortal line of the one-armed swordsman telling someone he was going to kill him with his own two hands! Not sure if that was in the original film or a later version.

Q: A mysterious name which popped up in credits (mainly for Chinese TV shows) in English was Morris Weinberg. Does the name ring a bell, and could you shed any light on just who this person is? His involvement in TV historicals and swordplay soap operas?

A: In terms of dubbing it was pretty universal. There was an effects track made for every film, before it was dubbed into Mandarin/Cantonese or English.

Q: Were you present when people like Godfrey Ho, Thomas Tang, and Joseph Lai were releasing the ripoff movies (ninja exploitation films like Fists of Legend 2: Iron Bodyguards)? Godfrey Ho had taken all these irrelevant old kung fu movies, spliced in a few shots of ninjas shot 20 years later, and cashed in on the “ninja craze” of the 1980s. With ninjas wearing headbands (common Halloween accessories) that clearly said “NINJA,” did you ever ask Godfrey Ho, “Just WHAT were you thinking?”

A: I did do a lot of work for Tomas Tang and Joseph Lai. I remember dubbing a Korean film they’d bought that was originally about the war between North and South Korea, and I changed it all (at their request) to the fighting in North and South Vietnam! They also bought quite a few Korean kung fu movies which I guess the audience might have thought were Chinese films. And I guess it didn’t really make much difference – people don’t go to the cinema because of where the film originates, do they?

Q: On a related subject, what were some of the strangest movies you had to dub?

A: I dubbed a film called The Gate of the Hell (!) which starred one of the dubbers (Warwick Evans) as Dracula. That was a bit bizarre. We also did a few p*rnos. There were two women dubbers doing all the female parts, and one of them was rather shocked as she’d never seen a p*rn film before – and was well into her 40s.

Q: More than once, companies (i.e., Toho in Tokyo) outside of Hong Kong also utilized the HK dubbers. Do you know if they paid better than the Hong Kong companies?

Q: Are there any other interesting tidbits of information you can think of that the legions of kung fu fans might not know?

A: The sounds effects were quite interesting. I wandered into a studio where they were doing them once, and they punched a cardboard box to make the sounds of hitting someone! And swished a cane around for the swords.