Todd Gilbert poses with Zambolar during the making of Ultraman: The Ultimate Hero. Photo © Todd Gilbert.

With more than 100 feature-film credits to his name, Todd Gilbert has worked on some of Hollywood’s biggest blockbusters of recent years.Mr. Gilbert has served as post-production supervisor on such films as: Righteous Kill (2008), The Expendables (2010), Olympus Has Fallen (2013), and Criminal (2016). He also served as associate producer on the Bruce Willis actioner 16 Blocks (2006) and the Al Pacino thriller 88 Minutes (2007). Many years prior to these projects, however, Mr. Gilbert wrote the script for episode 7 (“Fires Below”) of Ultraman: The Ultimate Hero (1995). In July 2020, Mr. Gilbert answered Brett Homenick’s questions about Ultraman: The Ultimate Hero in the interview that follows.

Brett Homenick: Please tell us some information about your background and early years, such as where you were born, what your hobbies were, etc.

Todd Gilbert: I was born and raised in Colorado and moved out to California to attend UCLA where I earned my Bachelor of Arts degree in motion pictures/television in 1988. I made some Super 8mm movies as a kid. Boy, what we could have done with the tools available to kids today.

BH: How did you get started in the film business?

TG: After graduating from UCLA with my film degree, I worked as a production assistant on commercials and a few features before taking more permanent type positions at Imagine Entertainment, Castle Rock Entertainment, and later Nu Image/Millennium Films where I spent most of my career in post-production. I currently serve as the post-production manager for Chapman University’s Dodge College of Film and Media Arts.

BH: What led to your being hired to write an episode of Ultraman: The Ultimate Hero (episode 7, “Fires Below”)?

TG: My friend from film school Bud Robertson got hired to write a couple of episodes of Ultraman: The Ultimate Hero, and he told me the director and producer were looking for other writers for some other episodes. I was lucky enough to be chosen to write episode 7, “Fires Below,” which was actually adapted from a Japanese script. I’m not sure if it had been produced before, and this was a remake, or if the producers just wanted to make sure that we were working in the right direction.

BH: So you were given a translated script that you had to adapt for American audiences?

TG: That’s basically correct. I don’t remember how detailed the translated script was.  We were supposed to use it for our general direction but then make everything feel grounded in American culture.

BH: Did you have any familiarity with the character of Ultraman before getting hired?

TG: This was my first introduction to Ultraman. I’m embarrassed to say I hadn’t heard of him before. Working on the production was certainly a pleasure, though, and I came to appreciate the character and world that he inhabits.

BH: Were you always going to write just one episode, or was there ever consideration for you to write more?

TG: I’m sure I was willing to write more episodes, but I think by the time I finished my episode all of the other episodes were already assigned.

BH: What do you remember about working with director King Wilder and producer Julie Avola?

TG: I remember King was very enthusiastic. Julie was all business. She handled everything.

BH: Did you interact much with the Japanese side, Tsuburaya Productions?

TG: Unfortunately, no. I was completely insulated from the Japanese side. I would like to have had direct input, but I think it probably would have been difficult to wrangle with so many writers. 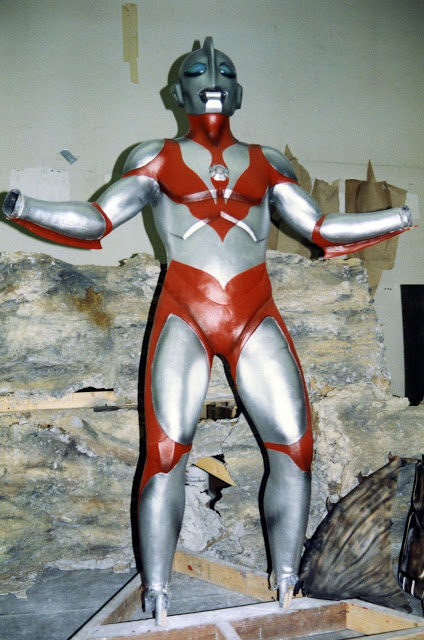 TG: I think we were all very influenced. We definitely wanted to do justice to what came before.

BH: How much freedom did you have to write? Did Tsuburaya Productions have a lot of requests about the script?

TG: We got some revision notes, but they were not very extensive.

BH: Do you remember the gist of any of the revision notes you received for your script?

TG: I remember I had a line, “Whoa, Nelly,” that just ended up being, “Whoa,” in the production. They probably thought my line was too cheesy.

BH: How many drafts of the script did you write?

TG: I think only two to three. The only thing that changed much from my original draft was the ending.

BH: What was the original ending that was changed?

TG: I think my ending was Ultraman kicking the monster’s ass, and they came back to me and said they wanted it to be more of a peaceful ending to reflect the idea of there not really being a bad guy. The monster was just an agent of nature trying to send a message that we were not doing a good job with the environment, etc. So Ultraman and the monster come to a sort of unspoken understanding that takes care of the situation.

BH: How long did it take to write the script, from start to finish?

TG: I think it was only two weeks or so, but it’s so long ago that it’s hard to remember exactly.

BH: Did you have any ideas for Ultraman or the monster Zambolar that ultimately didn’t make it into the show?

TG: I think most of my ideas made it into the show.

BH: What was the most challenging part of writing the script?

TG: I think the most challenging part was fitting everything into the short format for the series.

BH: What did you think of the finished product?

BH: Did you get much feedback from Tsuburaya Productions?

TG: I think they were happy with the show.

BH: Did you ever get to meet the cast or crew?

TG: I met some of the crew.

BH: What were the circumstances?

TG: Kevin Hudson who built most, if not all, of the models was a friend of mine from film school. I remember there was a restaurant in Burbank called The Odyssey, and it was sort of on a bluff, and it burned down, so the production ended up using the parking lot as a place where they built the miniatures and shot those. I visited set at least once, maybe more.

BH: Overall, how would you rate the experience of working on Ultraman: The Ultimate Hero?