Kevin Hudson with Shinji Higuchi on the set of Ultraman: The Ultimate Hero. Photo © Kevin Hudson.

Kevin Hudson is one of Hollywood’s leading visual effects artists whose impressive career runs the gamut of decades. Mr. Hudson’s SFX credits include: Star Trek VI: The Undiscovered Country (1991), Batman Returns (1992), Contact (1997), Stuart Little (1999), The Polar Express (2004), Superman Returns (2006), and The Dark Knight Rises (2012). In 2017, Mr. Hudson made his debut as a writer-director with the animated short Weeds.

In 1993, Mr. Hudson made an indelible mark on Ultra-history when he built the Ultraman suit for Ultraman: the Ultimate Hero. Mr. Hudson was happy to discuss his work on the only made-in-America Ultra-show with Brett Homenick in the following 2006 interview.

Brett Homenick: How did you get involved with Ultraman(: The Ultimate Hero)?

Kevin Hudson: A friend of mine was doing the casting on Ultraman, and he recommended me to Julie (Avola) and King (Wilder). I had been doing creature effects for around eight years by that time and had a good background and a passion for doing the project. 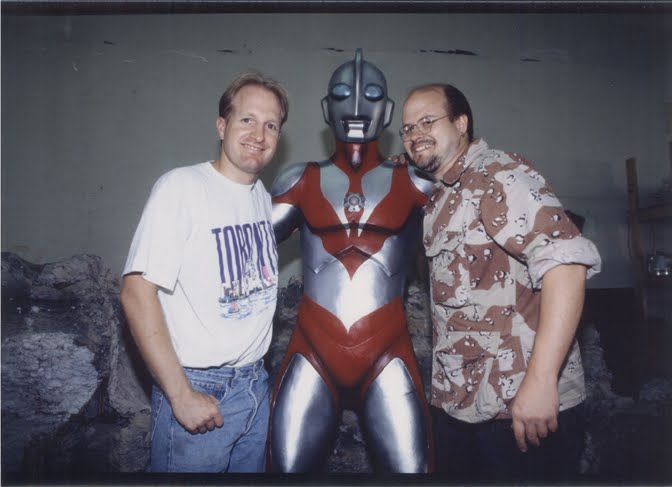 BH: Please describe the process of building the Ultraman suits.

KH: First we did a full body, head, and hand cast of Scott Rodgers, who played Ultraman. We made a plaster version of him that we sanded down, and then made a fiberglass/urethane mold of him. We built fiberglass mannequins from this mold. Onto one of these mannequins, we sculpted the suit out of Chavant clay. It is a clay used for sculpting cars. We wanted to get a very sculptural feel to the suit that would make it different from the wetsuit or spandex suits that had been used in the past. This sculpture was then molded in fiberglass, and foam latex was injected inside. This was baked onto a custom spandex suit that was fitted to Scott. The suits were then seemed and painted with red and aluminum paints.

The helmet was sculpted by Bruce Fuller, and was made out of fiberglass. Electronics were built into the various helmets, and it was ready to go to set.

On set, Scott Rodgers wore the suit, and of course it was the middle of summer, and the temperatures were well above 100 degrees as we were filming up in a parking lot perched in the hills above Burbank. When I’d help Scott out of the suit at the end of the day, it was completely soaked in sweat since the suit is basically a big body-fitting sponge. Sixteen suits were built. One for each episode, and three spares.

BH: What was it like to work with Bruce Fuller, who also built many of the show’s suits?

KH: Bruce is awesome. As soon as I got the go-ahead to do the show, he was the first person I called. I’d worked with Bruce for many years and knew he had a love for this type of project. His sculpting and painting style was also perfectly suited for this project.

BH: How was your working relationship with King Wilder, the show’s director?

KH: King was great. I think he and Julie (Avola, the producer) were totally committed to making the show the best it could be. It was a huge project, and we had only a small budget, but I think every dollar shows onscreen. It was a tricky shoot in that we shot all the scenes for every episode that are in a specific set at the same time. It was more like a feature film in that way. King had to be really prepared in order for it all to work, and I thought it worked well. 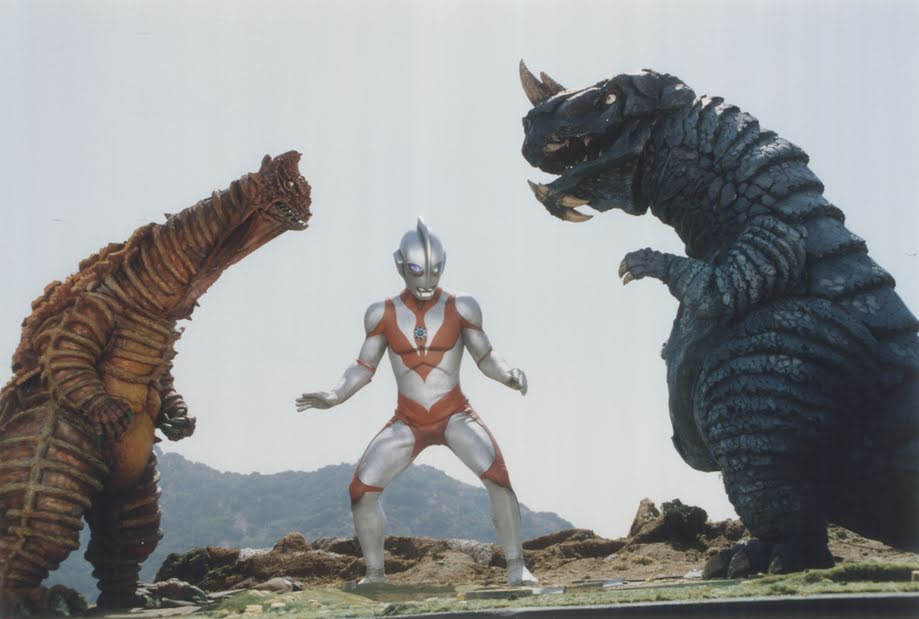 Banila and Aboras square off against Ultraman. Photo © Kevin Hudson.

BH: Shinji Higuchi, who went on to greater fame for his SFX work on the Gamera series, worked on the series. What was he like back then?

KH: Shinji was great. I had an awesome time working with him. He had just finished on Godzilla vs. Mothra, and we were both Godzilla fans, so we hit it off. Bruce, Shinji, and I all got along great. We were having so much fun doing this project. It was interesting because Shinji doesn’t speak much English, and I don’t speak any Japanese, but at times we had an interpreter, but when we didn’t, as artists, we found a way to communicate. We’d gesture, draw, grunt. It was crazy, but exciting at the same time.

We went out to karaoke one night, and I discovered that though Shinji doesn’t speak English, he can do perfect English when he is singing an Elvis song. He’s a huge Elvis fan.

I’ve seen Shinji a couple times over the years since, and it is always a treat. I feel very honored to have worked with him, and proud that he has gone on to such success. He’s an amazing artist.

I think it is funny that he became famous for the Gamera series. I was a huge fan of it when I was a kid, but Shinji hated Gamera, and was always amazed that I liked it. I think it is some sort of karma that he did the FX for the film series. I’ve seen the work, and it is awesome.

BH: Talk a little about what went into building the monster suits.

KH: The monster suits were mostly foam fabrication costumes headed by Lynette Johnson. We’d cut foam (large sheets of couch foam), and glue them to form the basic body. The head and hands were mostly sculpted.

For the more angular shaped creatures like Baltan, we used a harder foam, and again, it was cut and glued to make the shapes. We then covered the foam with a thin coat of fiberglass, and sanded it to a polish.

The mechanics for the creatures were handled by Wes Caefer.

For the bug-like characters, or space characters, we used iridescent paint to give it that hard shell look. I thought this made Baltan look really cool.

One particularly challenging creature was Kemura, which had a large shell that could open, and a tail. It used all of the different types of construction. It had a head that was sculpted and cast in foam latex. It had a body that was foam construction. The shell was built out of the stiffer foam and covered in fiberglass.

One of the biggest challenges we faced was keeping the suits to a manageable weight, making them somewhat maneuverable, while holding to the design given to us by Shinji and his group. I tried one of the suits on to see what it was like, and it was like walking around in a sauna. Very hot. The stuntmen that were in the suits wore a “cool suit” under it, which is basically a vest that has cool water pumped through it. I think most everyone in the creature shop at some (time) or other tried on a suit to live out their own Godzilla fantasy.

Joe Viskocil provided the pyrotechnics, including explosions and the fire-breathing effects. 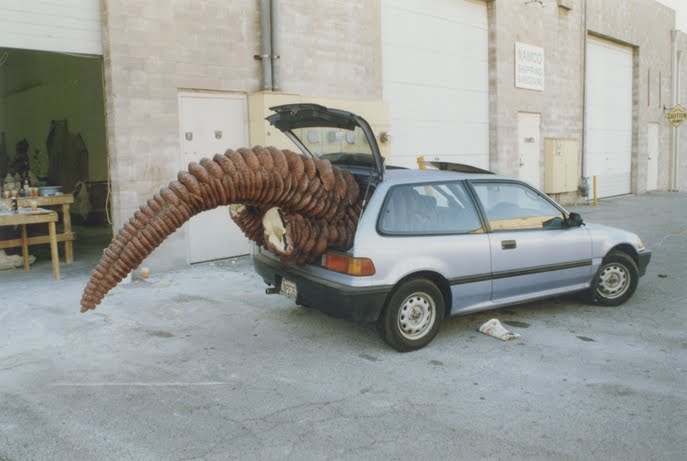 BH: One of my favorite pictures from the set is the one of Red King in the back of someone’s car. What’s the story behind that picture?

KH: Red King had to go to set on short notice, and we didn’t have the large truck we normally had that day, so he had to go in the back of a hatchback. You can’t do that in digital. It’s a fun shot. Everyone loved the Red Kings.

BH: Do you have any other interesting stories from the set?

KH: The costumer who hand made the spandex base for the Ultraman suits was pregnant at the beginning of the film. By the time we went to set, she was in her final weeks. Scott, who played Ultraman, lent her his trailer, which was air-conditioned, to lay down in. I remember helping her around the set, but she was so dedicated to the project that she wanted to be there for the Dada suit, which she also built.

BH: I understand the crew planned a surprise birthday party for you when the show wrapped. What happened there?

KH: We were making Ultraman the summer that Jurassic Park came out, which caused me some frustration, since the computer work in that signified the beginning of the end of traditional monster effects. Or so I thought. Like any artist, seeing the amazing work in that movie made me question the quality of the work I was doing on Ultraman, and made me a little depressed. Julie was awesome, and she really helped me to see it in perspective. She reminded me that Ultraman is not Jurassic Park, and the work that my team was doing was terrific on Ultraman. That conversation has always stuck with me.

Anyways, on my birthday, we were shooting, and it was the scene where Mrs. Red King falls off a cliff. It was the last shot of the day, and we carried the Mrs. Red King suit to the top of this hill, and tossed it over the cliff. When I got to the bottom of the hill, anxious to see what was left of the suit, they had a cake and, of course, a copy of The Making of Jurassic Park signed by everyone on the crew for me. I think I saw Jurassic Park nine times that summer. It was the combination of Ultraman and Jurassic Park that got me to change my career to computer graphics from traditional creature-making techniques.

BH: Do you have any closing comments?

KH: If there is one thing I tell people, it’s to follow your passion. My parents were not particularly thrilled about having a son that wanted to be a creature maker when he grew up, but from the time I was 8, I knew that this is what I wanted to do.

In addition to working at Sony Imageworks doing digital creature effects, I teach at Gnomon School of Visual Effects. Every term, I meet students who share my same passion, and are following their dream.

I look back on that crazy Ultraman year, and am amazed that we did what we did. We started the show with nothing but an empty warehouse. We built tables, we made the monsters, and when we were done, we shipped the monsters to the Ultraman Museum in Japan, and gave away the tables. It absorbed my life seven days a week, but when I look back, it was a truly amazing experience.