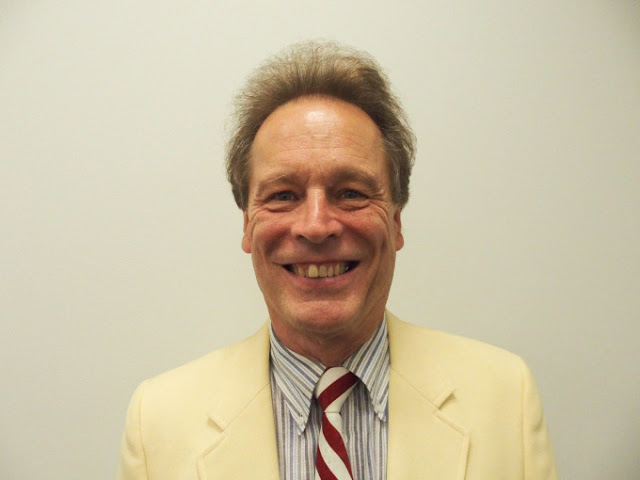 Jeff Berglund appeared in 1991’s Godzilla vs. King Ghidorah as a World War II-era naval officer who exclaims the famous line, “Take that, you dinosaur!” once it seems that the Americans have killed the rampaging Godzillasaurus. Mr. Berglund was born in Mitchell, South Dakota, on April 6, 1949. He graduated from Carleton College in Northfield, Minnesota, in June of 1970 and started working at Doshisha High School in Kyoto, Japan, in September that same year. (He had gone to Doshisha University — connected to the high school — from June through December of 1969.) Mr. Berglund taught at Doshisha High School for 22 years and then moved to Otemae Women’s University in 1992, and from there to Tezukayama Gakuin University where he has been teaching (as a professor) intercultural communication. Beginning on April 1, 2008, Mr. Berglund started a professorship at Kyoto University of Foreign Studies.

His wife, Kaoru (a high school English teacher), who is Japanese, and he got married in 1972. They have three sons, Ken, R. Jay, and Soseki. Ken is married and has three children (Mr. Berglund’s grandchildren): Rita, Ron, and Rick. As of 2008, he and his wife, Junko, live in North Carolina where Ken is doing post-doctoral research and teaching in the department of medicine at Duke University. R. Jay works for a computer company in San Diego. Soseki lives with his wife near the Berglunds’ house in Kyoto, and they have a small toy store/cafe/bar in the two-story semi-attached part of Mr. Berglund’s house. Their house is a 160-year-old Japanese house right on the banks of the Kamo River in downtown Kyoto. The house was originally a Japanese inn, giving them a lot of room.

In a 2008 interview, Mr. Berglund answered Brett Homenick’s questions about his time in Japan and his role in Godzilla vs. King Ghidorah.

Brett Homenick: What brought you to Japan?

Jeff Berglund: I came as a student to study Japanese religion (Buddhism and Shinto) and Japanese language in 1969. I liked Japan so much that I decided to come back and work and live here after I graduated from college. I learned Japanese quite quickly and have now spent more of my life speaking Japanese than English. I have written 11 books in English (supplementary English textbooks for Japanese students) and four books in Japanese: a murder mystery, a book of essays, and two books on intercultural communication.

BH: How did you get involved in the entertainment business?

JB: The first book that wrote was on The Beatles, and it was a best-seller. The second book (about the sumo wrestler Takamiyama) was an even bigger best-seller. The news of the books caught the eye of a famous Japanese emcee (Kyosen Ohashi), and he asked me to be on his TV show Sekai Marugoto How Much? (“How much for the whole world?”), a quiz-variety show (about 1985). I became a semi-regular on that show, and from there I was asked to be on other TV shows, and it just kept snowballing. I have done more than a thousand TV shows, and I also do radio and public speaking jobs. I now have one weekly radio show and four weekly TV shows. I give about 50 or 60 public speeches a year. My wife and I have our own English-language school at home for adults as well as children, so I’m busy all the time with radio, TV, public speaking, teaching at home, and a fully tenured professorship workload. I am currently doing research on the communication problems of people with disabilities. I am interviewing college students with disabilities and will be publishing a paper on the results in the near future. I have only been in three movies: Godzilla (vs. King Ghidorah), Katsu Kaishu, and Gokudo no Tsumatachi. All three were only small parts with only a couple of spoken lines.

BH: How did you get cast in Godzilla vs. King Ghidorah?

JB: I was doing a three-hour night radio program on MBS in Osaka on Wednesday nights, and Kazuki Omori was doing the same show on Friday nights, so we got to be friends. He asked me if I wanted a part, and I thought it would be fun.

BH: Were you involved with any preproduction meetings?

BH: What do you remember about the location where your scenes were shot?

JB: Not much. It was fun wearing a uniform, and after the shooting each day (I was only on location for three days), we drank a lot of beer and sake and had a great time.

BH: What was it like to work with director Kazuki Omori?

JB: He’s really laid-back. Because he’s a personal friend, it was a lot of fun to work with him.

BH: How did he direct you in your scenes?

JB: He didn’t have a script in English, just in Japanese. So Kent Gilbert (the ship commander) and I just translated our Japanese lines into English. It was a lot of fun. Omori Kantoku (filmmaker) tried to get us to see the whole picture of what the film was going to look like when it was finished so that we would know what kind of part we were playing.

BH: Would you happen to remember who wrote the English script?

JB: No. I don’t think there really was an English script.

BH: What do can you recall about working with Kent Gilbert?

JB: He and I are friends, so it was quite easy. He was my superior officer on the ship in the scenes we shot, so we had a lot of fun with that because actually I’m older and have been in Japan longer than he has.

BH: How long did filming your scenes last?

JB: I really enjoyed seeing myself on the big screen and seeing my name in the credits. Most of the stuff that I do in Japan is completely unknown to Americans, so this movie screening in the States (and your magazine) are things that I can tell my family in South Dakota about. If you look up my name in the yahoo.co.jp search engine, there are more than 20 pages of stuff. But Jeff Berglund in yahoo.com only brings up some Americans with the same name.

BH: What did you think of Godzilla vs. King Ghidorah when you saw it?

JB: I thought it was very kitsch. I really enjoyed it.