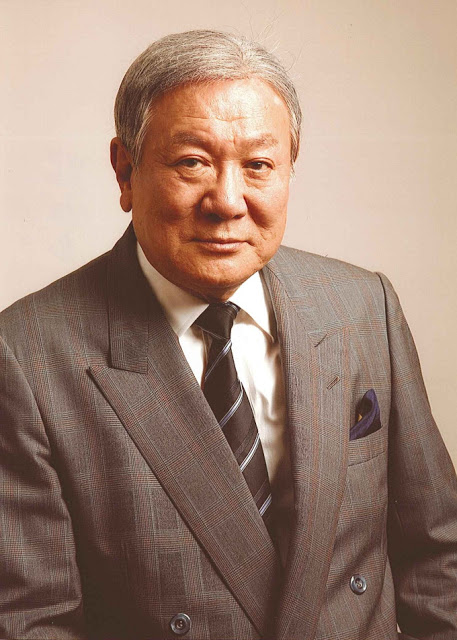 Goro Mutsumi is an actor who is well-known to G-fans as the alien leader in Godzilla vs. Mechagodzilla (1974) and Terror of Mechagodzilla (1975). Mr. Mutsumi’s other genre credits include the Toho sci-fi epics The War in Space (as another alien leader!) and Espy (1974). He also co-starred in the Tsuburaya Productions television series Fireman (1973). In 2009, Mr. Mutsumi answered questions posed to him by Brett Homenick and totorom in an interview translated by totorom. For a lengthier interview with Goro Mutsumi, please follow this link.

totorom: Did you have any favorite movies and actors when you were a child?

Goro Mutsumi: In the movies that I saw in my childhood, I found everyone attractive. I fell in love with all the movies. I particularly liked Ms. Haruyo Ichikawa. Maybe I was precocious. (laughs) (Haruyo Ichikawa was a Japanese movie star in the 1930s and ’40s.)

Brett Homenick: How did you become an actor?

GM: When I was a junior high school student, I saw a Shingeki Theater play for the first time. I was moved very much. I think I was motivated to become an actor by that.

totorom: What do you remember about your debut in theatrical play or movie?

GM: Fortunately or unfortunately, I was pushed to make my debut, although I was still immature.  So I struggled like a fish out of water. I do not want to recall what I experienced then. It’s funny, however, I still clearly remember how I felt when I completed my first acting job. I found myself feeling very proud. I tend to forget the bitter memories and only remember the good things. (laughs)

totorom: You overdubbed the voice of Russ Tamblyn for the original Japanese release of War of the Gargantuas.  Did you visit the studio when they were making this movie?

GM: I am sorry; I do not remember it.

totorom: When you recorded your voice, were Kenji Sahara and Kumi Mizuno also with you? Do you have any memories?

GM: Very sorry again, but I do not remember about this movie.

totorom:  Did Ishiro Honda, director of the movie, give you any particular instruction or suggestion for the overdub?

GM: Maybe he gave me some instructions, but I do not remember clearly.

BH: How did you get cast in the TV series Fireman?

totorom: What do you remember most about working on Fireman?

GM: We, the cast of the show, enjoyed working together very much. We always went for a drink after shooting. Sometimes I had a hangover the next day when I came to the studio. (laughs)

totorom:  For Fireman, you worked with Shin Kishida.  What do you remember about him?

GM: He was a great actor. He acted with clearness like a crystal. He always gave an inspired performance. He had a great concentration. I thought he was a genius. Ten years later, I asked him to play the part of Vincent van Gogh for Lust for Life written by my mentor, playwright Juro Miyoshi. He willingly accepted it. He was also well known as a collector of butterflies. When he went to Taiwan for butterfly hunting, I joined him.

He was such a good friend to me. We got along so well together that we got sick and were hospitalized at the same time. I got well earlier and was released from the hospital. On the way back from the hospital to my home, I visited his hospital to cheer him up. A few hours later, he passed away. I was one of the last persons to see him.

BH: How you did get cast in Godzilla vs. Mechagodzilla?

BH: You were cast in a nearly identical role in Terror of Mechagodzilla. Was there a reason that the roles were so similar and that you were chosen for both?

BH:  What do you remember about working with Akihiko Hirata?

GM: I do not remember clearly about working with him for this movie. I remember, however, about the other movies. Mr. Hirata was intelligent and handsome. He was a wonderful man with a very attractive personality.

BH:  What can you tell us about working with Katsuhiko Sasaki and Tomoko Ai?

GM: I do not clearly remember. We did not have much time to get to know each other while we were working.

BH: You worked with Jun Fukuda on several films. How would you describe your relationship with him?

GM: He was always smiling. He was very gentle. Sometimes he was very severe in his directing, but we actors always felt his love of movies. It is rare for directors to have a good combination of severeness and gentleness like Mr. Fukuda.

GM: It is very difficult to compare the two directors.

BH: Do you have any memories that you can share about acting in Espy?

GM: In others days, I was really busy with a lot of projects going on same time. So I could not afford to get familiar with things related to each movie.

BH: You also appeared in The War in Space as another alien leader. Was it a difficult process to put on your elaborate costume and make-up for your scenes?

GM: Regarding the costume and make-up, I left everything to the specialists.  As for acting, I tried to be an inorganic creature without any emotions. It was not particularly difficult.

BH: What stories from the set of The War in Space can you share with us?

GM: I was working very hard to play my role, so I could not afford to make memories from the set. I am very sorry again that I cannot tell you interesting stories.